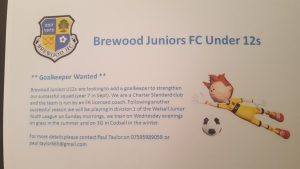 The u13 fixtures have been updated to reflect some new teams and amendments to divisions.

The u14, u15 and u16 fixtures are being similarly updated and reviewed over the coming weekend.

We train on Thursday evening at Pelsall EDC at 615 and will welcome players in all positions and of all abilities. Please contact James Webster 07473 765722 jameswebster@live.co.uk.

Bentley Community Tigers u11’s  are currently looking for a goalkeeper for the upcoming season.  Please contact Natalie on 07399 611577

Want a couple of players for this season, we are in division 3 and looking for a couple of good steady players who want to win and commit to the team with a future. Phone Phil on 07542819620. 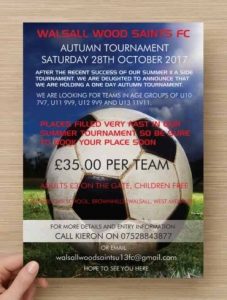 Sheffield United are hosting our annual tournament again on 3rd September 2017. This has traditionally been a good opener to the new season, with all teams playing to ages/rules of the upcoming season. It has also attracted teams from all the local leagues as well as from a bit further afield and offers the opportunity to play new teams.

Many thanks and we hope to see you in September.

If you require any further information please contact me.

Just a reminder that the above briefing will be held on Thursday 7 September at Bloxwich Memorial Club.

If you are a goalkeeper and want a fresh challenge or are after a team let me know.. We are a friendly family run club where all managers are minimum of level 1 trained.. We train at Willenhall Park on Noose Lane every Saturday from 10-11:30.. if you are interested pls contact Darren on 07904027163..