Chasetown Colts Under 10’s (current school year 5) are looking for new players in all outfield positions as they move to 9-a-side next season. We are a well established, friendly team who train 5:30 pm to 6:30pm on Friday nights and will be playing Sunday morning matches in the Lichfield league in the 2018/19 season. Please text Steve on 07779770214 for more information. 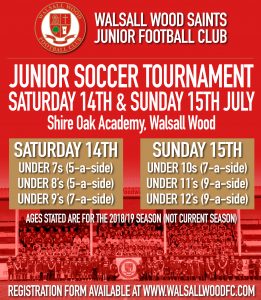 Wyrley Rangers 3 – Silverdale Saints 0
Congratulations to both teams who played in the U13’s Ron Smith Cup last night.  It was an exciting and competitive final played in the true spirit of grassroots football.  A huge crowd ensured that there was an electric atmosphere all evening.  Congratulations also go to the teams who attended to collect their League awards – well done to all of you.   Thank you to Rushall Olympic FC, Mike Smith for presenting his fathers cup along with Ron’s grandson’s Adam and Scott and to our officials:   Jake Richards, Jack Hunt and Kyle Husted. 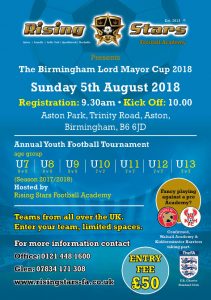 A reminder that the U13’s Ron Smith Cup Final is taking place tonight at Rushall Olympic FC – Silverdale Saints v Wyrley Juniors Rangers and KO is at 7.30 p.m.  Please come along to support the teams and to make a great atmosphere for the final.  League Presentations also taking place at half-time.  Only £1.00 entrance fee per adult, there is no charge for accompanied children under the age of 16 years. Look forward to seeing you there.

Cresswell Wanderers Colts u13s looking for a couple of quality players for next season in the mjpl and Walsall league.
We are a successful well run team with 4 level 1 coaches, we currently train Thursdays but will also be training Mondays aswell come June. So if you think you have what it takes to improve the team come along for a trial, plenty of friendlies and tournaments booked for the summer.
Call Gaz 07704239902

Silverdale Warriors Under 7’s are currently recruiting new players for all positions including goalkeeper & all abilities for the Under 8’s 2018/2019 season.

If your child is in current year 2 (going into year 3 September 2018) We would love to hear from you to join our current great players & parents we have.

Training will be on Friday evening between 7pm – 8pm

Our next cup final is the U13’s Ron Smith Cup on Wednesday 18th April 2018.  The teams are Wyrley Juniors Rangers and Silverdale Saints.  Venue is Rushall Olympic and KO is at 7.30 p.m.   League presentations will also be taking place during the evening.   Entrance for all adults is £1 and children under the age of 16 enter free of charge if accompanied by an adult.   Please come along and support both teams.

Brownhills colts u 12 year 7 are looking for a couple of new players we are a new team of players representing brownhills colts a very well established organisation with many years experience with youth football our team have had one or even two players short this year over a large number of games and still holding there own , yes losing but with the same number of players as the other team the lads would WIN .so things are looking up with a couple of other players to add, ( so come and have a go ) we train on Tuesday night at Holland Park brownhills subs are £5 per week only when we play, Just phone me Phil Brandon on 01543 821151 ,or text me on 07542819620.