Walsall Phoenix Titans – a newly formed Under 7’s team (for forthcoming season).
We are looking for a Goalkeeper to strengthen our already competitive squad.
We are based around the Aldridge / Walsall area and from September training will be at Shelfield Ormiston Academy on Tuesday evenings 6-7pm.
If interested please contact Steve on 07779 625189.

Wryley Juniors Eagles u10s
Currently require players who are going into year 5 at school this year for the new season ahead.
We are currently holding trial and training sessions
If you are interested in coming long please contact me on
07949004464

Sportsco Saints U14s are on the lookout for Players.

We train Wednesday evenings in the Perry Barr area and we will be playing in the Walsall Junior League football on Sunday mornings. 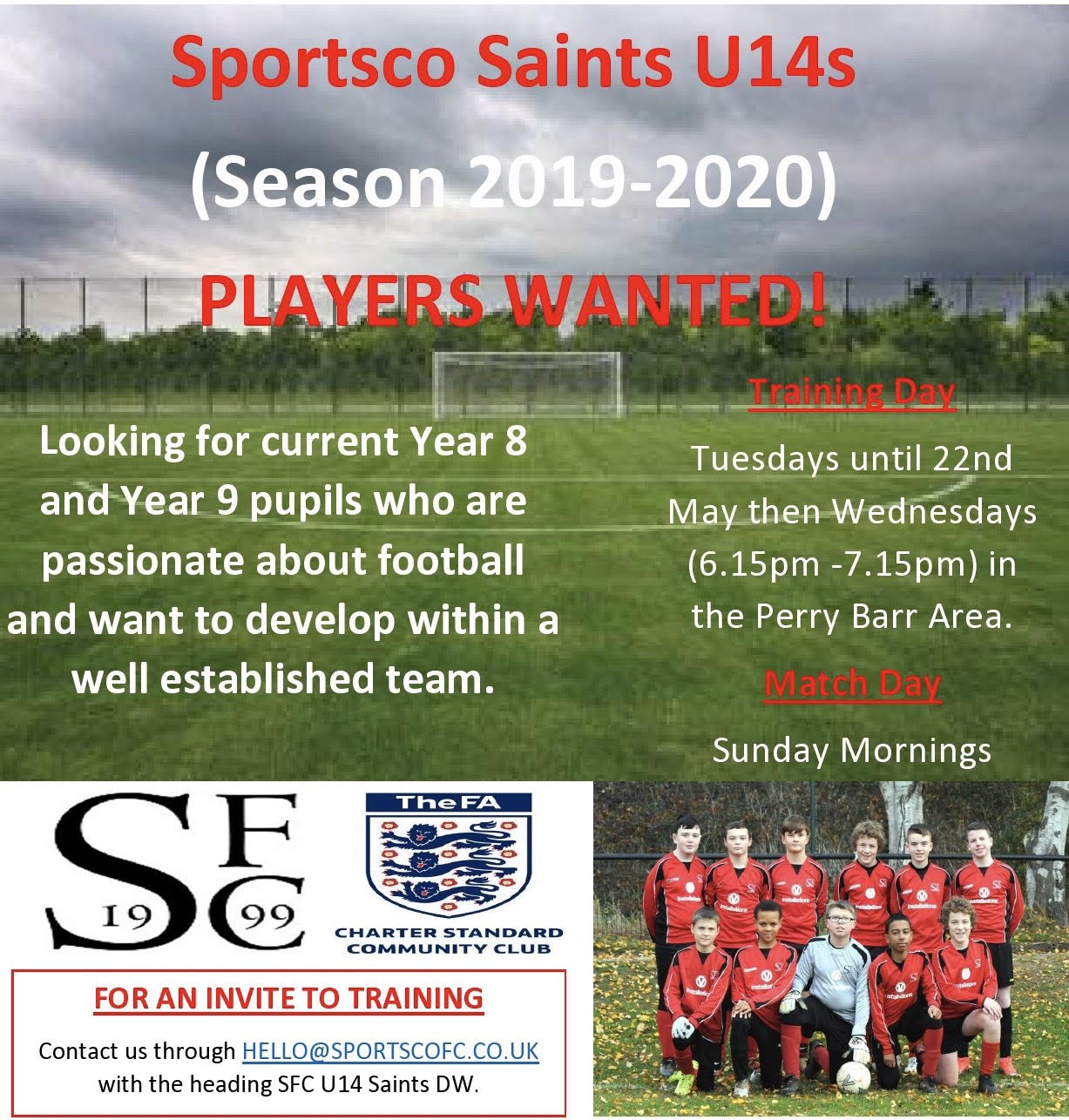 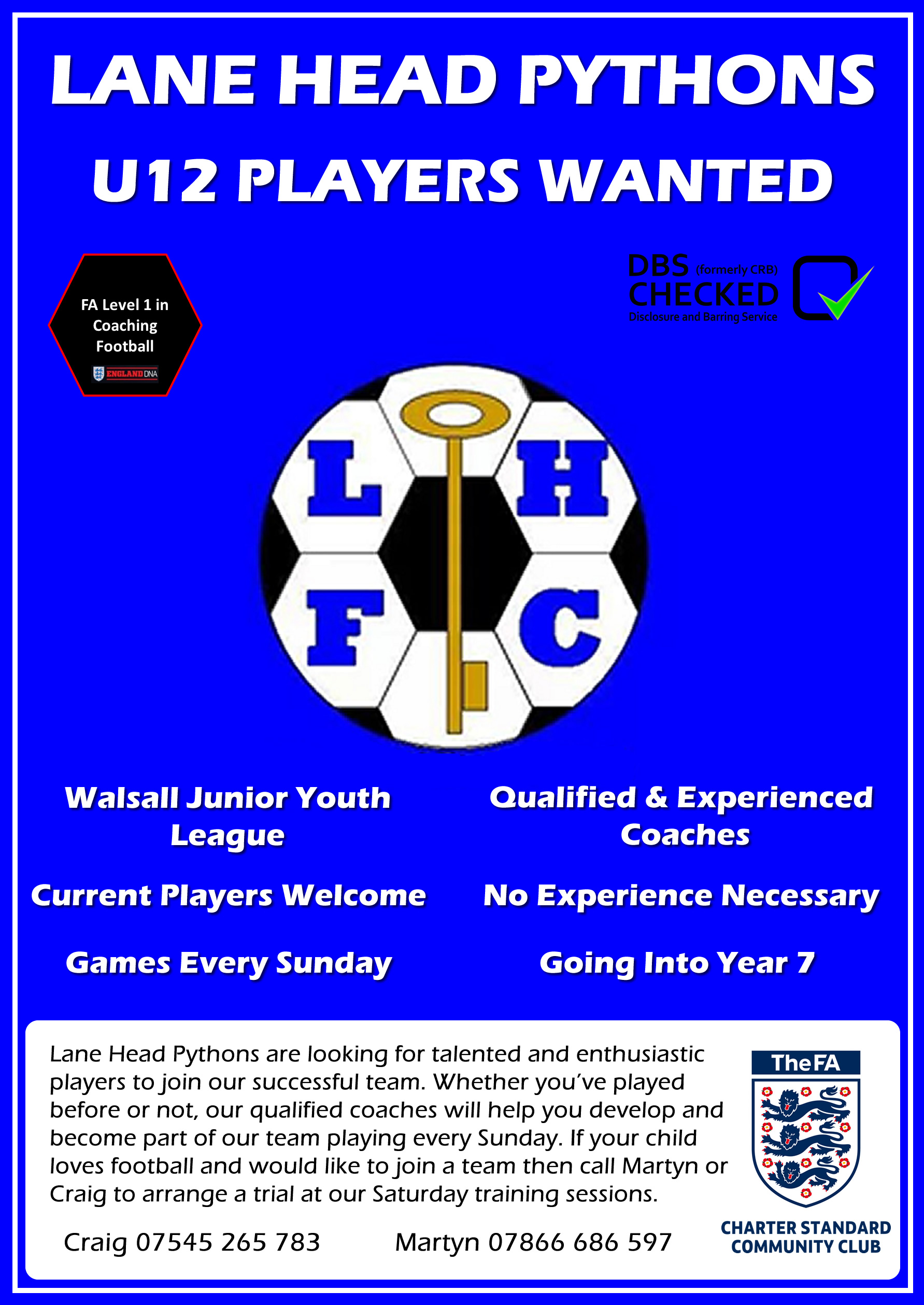 Grassroots Match Official of the Year

We are proud to announce that our Referees Secretary – Alistair Smith – has been awarded ‘Grassroots Match Official of the Year Runner Up’ by Birmingham FA.  Thoroughly deserved recognition for all of your hard work Alistair – well done.

PLAYERS WANTED FOR CONSTANTLY IMPROVING U14s TEAM
GREAT BARR AREA
We are looking for players at FC Premier Colts to strengthen our squad.
We train at Redhouse Park on Wednesdays 18.00 till 19.30.
If you fancy coming along then call Ian on 07812 558 681 or just turn up.

AFC Willenhall U10’s Girls (year 5 September) are looking for a few more players to join our current squad for their first season in the Walsall League. If the England Lionesses’ have inspired your daughter to play football then please contact Mark – Club Secretary on 07772132329

AFC Willenhall U9’s (Year 4 September) are looking for a few more additions to it’s current squad as they move to 7 a side.
We are an ambitious and progressive team who managed to reach a Cup Final in their first season.
FA qualified and DBS checked Coach.
Please call John on 07787445481 for details.

Four Oaks FC U9 to U13 Players Wanted

With 10 teams competing in the WJYL across all age groups between U9 to U14, Four Oaks FC is looking for additional players to supplement existing squads. Both of our U13 teams will play home games at the clubs new acquired ground at Mill Green, Aldridge. As will the U14’s. All other teams play on the WJYL designated pitches. Our team coaches are FA certified and have the appropriate DBS clearances etc. If your child is looking to join a forward thinking and long-established club then please contact Steve on 07415 649643 or steve.4oaks@btinternet.com.

BILSTON TOWN COMMUNITY FC UNDER 9,S NOW UNDER 10 SEASON 2019 -20 are looking for a KEEN  RELIABLE  GOALKEEPER, WITH SOME MINI SOCCER EXPERIENCE , OR HAD GOALKEEPER TRAINING , GOALKEEPER, WILL BE PLAYING REGULARLY, IN OUR TEAM WITH A GREAT BUNCH OF LADS, Must be in
school Year 4 now – year 5 September, We are  currently training on WEDNESDAY  evenings at east park Wolverhampton , 5.30 pm – 6.30 pm  and goals darlaston in the winter. 5.30 pm – 6.30 pm.IF INTERESTED. please  Contact Paul on 07902893941 or mike or Mike -07514 244978 for details. coaches  with several years experience.academy contacts, and fa  certs.